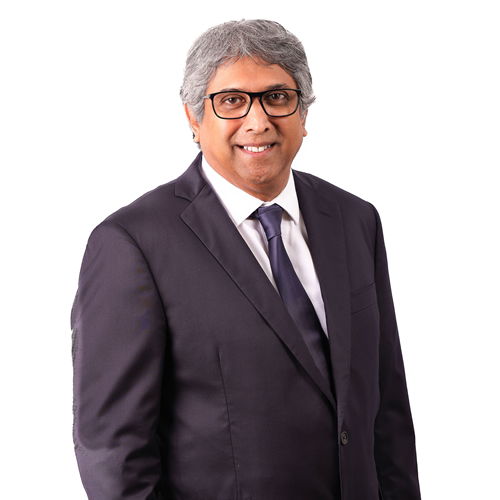 Suresh is man of unparalleled charm and intellect, his charm exceeded only by his intellect.

Suresh’s depth and experience in legal work is not just limited to civil litigation and advocacy in which he has represented and advised on banking, insurance, international trade, defamation, industrial relations, trade financing, shareholder and director disputes, intellectual property, contractual disputes, and tort and negligence claims.

Suresh has also represented a cross section of clients in uncontested and contested divorces and issues involving custody, maintenance and division of matrimonial assets, where he has successfully applied for the freezing and the non-dissipation of assets located in and outside the jurisdiction and successfully handled disputes relating to the removing/relocation of children.

With more than 20 years of experience and an uncanny ability to analyse issues at a micro and macro level, Suresh has been involved in many high-profile commercial and criminal cases, many of which have since become entrenched as ground-breaking precedents in Singapore case law. He has also been counsel for a number of local and international arbitrations and even a judge on the Small Claims Tribunal in the State Courts.

Presently, Suresh continues to value and contribute significantly to the development of Singapore’s criminal jurisprudence. He plays a key role in liaising with the relevant stakeholders in the administration of criminal justice on issues including disclosure obligations, sentencing options, accused persons’ rights etc. and is a respected senior member of the bar. Specifically, he continues to serve in various schemes like the Criminal Legal Aid Scheme and LASCO and continues to be an active member and contributor to the Criminal Practice Committee, Association of Criminal Lawyers of Singapore and Law Society of Singapore.

Some of his previous position and/or contributions include:-
– Legal Advisor to the Singapore Advertisers Association from 1991 to 1993
– Statutory Council Member of the Law Society of Singapore from 1992 till 1999 and 2001 to 2003
– Council member of the Singapore Red Cross Society where he served as the Director of the Legal and Welfare Divisions for a number of years;
– Honorary Member of the Society of Golden Keys.
– Vice-President of the Association of Criminal Lawyers of Singapore.
– Part of the Law Society’s Criminal Committee amicus curiae team in a landmark 3-judge Magistrate’s Appeal where the team put forward the Law Society’s views on the applicable sentencing benchmarks for offences under the Securities’ and Futures Act.
– Reviewing the United Kingdom’s Appropriate Adult Scheme and advising on its applicability and desirability in Singapore. Singapore is currently implementing the Appropriate Adult Scheme in incremental stages.
– Reviewing Hongkong’s practice of video confessions and advising on its applicability and desirability in Singapore